Our Mangano,
the only one
of its kind

Mangano in English means mangle. Invented by the ancients, it has been used for millennia as a driver of various activities. The Mangano in our workshop is unique in the world in terms of size and weight, and in excellent condition thanks to constant use. 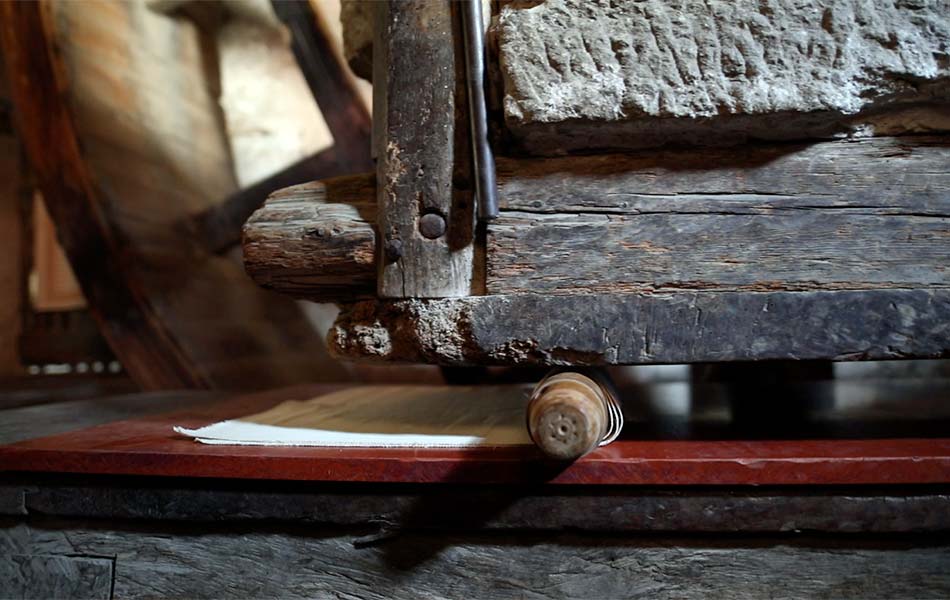 Mangano means a machine that produces force.
In our workshop the Mangano presses and irons the fabric, leaving it perfectly flat and ready for printing; thanks to this fulling process the fabric becomes soft, compact, smooth and glossy.
The machine was built in 1633: in the Town Hall there is a document to this effect. What makes the mangle at Stamperia Marchi special is its size, weight and good condition.
Its excellent state of preservation is due both to the farsightedness of the builder, who chose larch wood (also used in naval shipyards), renowned for its solidity, and the machine’s constant daily use, which have allowed it to remain intact through the centuries, just like a precious violin, which must be played to keep it in tune.

The Mangano through history

The mangle has marked human history: it was the first machine built by man and was used in every sphere.

The invention originated in Ancient Greece, where we find the mill wheel, which could be called a precursor to the mangle and the first real “motor” in history.

Thanks to Philo of Byzantium – 3rd century BC, this type of machine was known to the Romans, who used it in civil engineering works (mining and the construction of bridges, roads, aqueducts, palaces, circuses, theatres etc).
An outstanding example is the vast winch from the 2nd century AD depicted in relief in the Mausoleum of the Haterii (a family of builders), showing a group of slaves operating the wheel. Gregoriano Profano Musum, rome).

In the Middle Ages it was an instrument of war, mentioned frequently in Leonardo Da Vinci’s design layouts. It also appears in the paintings of Bruegel. Its use continued in the 19th century, as a lever for the extraction of coal in English mines. It was also used as a device to move water in mills. 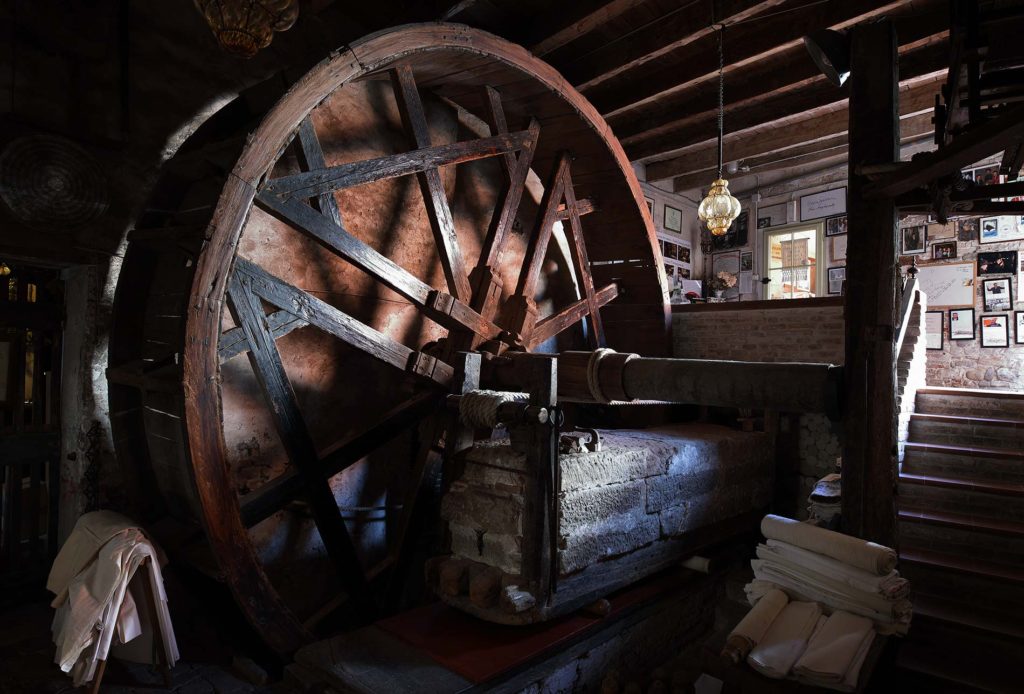 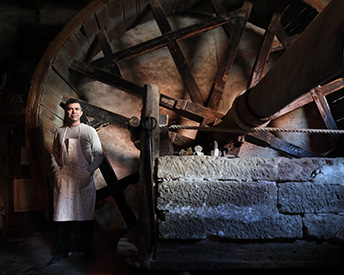 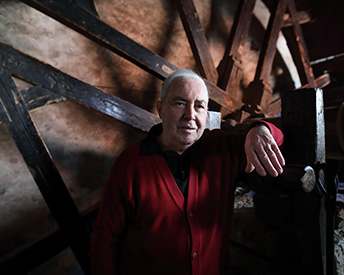 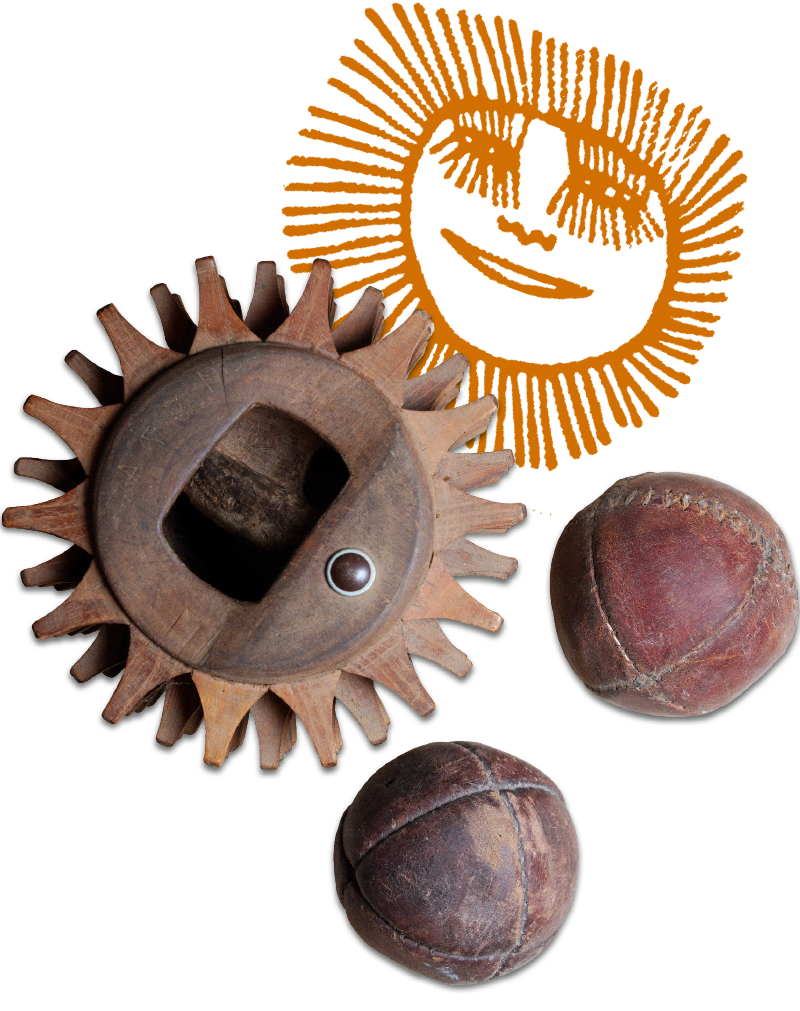 The allure of ingenuity

the precision of technology.

In Ancient Rome the mangle required many men to operate it; only the genius of Leonardo da Vinci understood its potential and reinvented its use.
The balance between the wheel and the weight positioned beside it determines the movement, or rather the breaking of the balance: the wheel and the weight each weigh exactly 5,500 kilos, but when the weight of a man is added the perfect balance is disturbed, the wheel acts as a lever and moves the weight, which carries out the important task of ironing and flattening the fabric.

The fabric is wrapped around maple wood rollers called subbi.
The rollers are positioned under the weight and follow the back and forth movement of the stone, enabling the fabric to be ironed and the warp and weft to be compacted, leaving the fabric soft, smooth and glossy.

It is only the weight of the man that moves the wheel and facilitates this operation, known as fulling. Before printing the fabric, and after printing, the mangle is used to improve the appearance of the fabric and give excellent results.

Soft, compact and glossy fabrics:
the Mangano in action

daily use has kept the machine intact over the years, like a valuable violin that must be played to stay in tune.

Antica Stamperia Marchi is more than a workshop and a boutique. It’s a place brimming with history, with smells and materials; a place where you’ll rediscover ancient arts, tools and methods. It’s also a museum offering guided visits for groups and individuals on request. 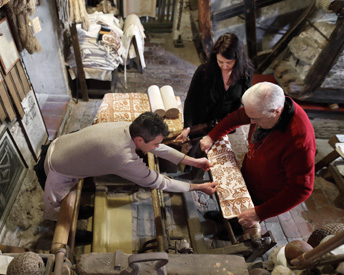 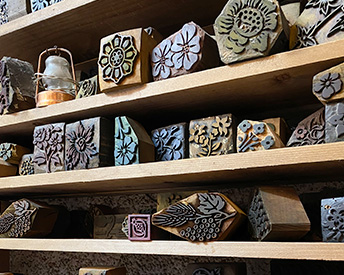 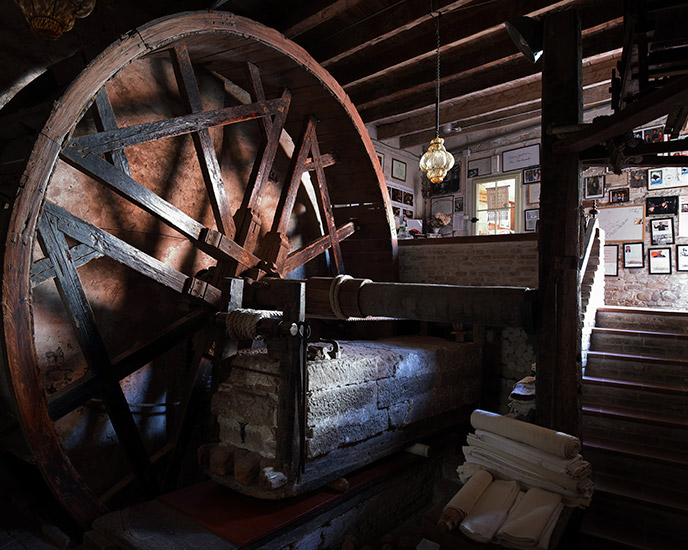 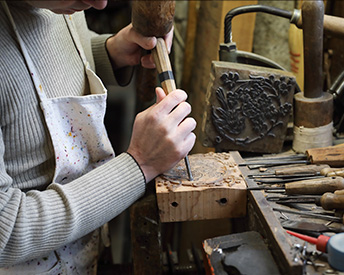 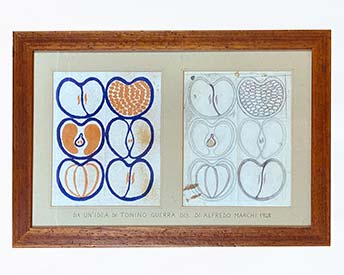 Register and receive all the updates on  our products and special offers! 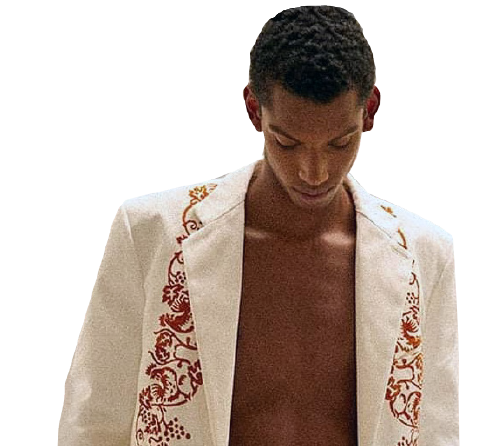 Our products are unique because they're hand-made, so there's a waiting time of 15-20 days. Explore our shop.